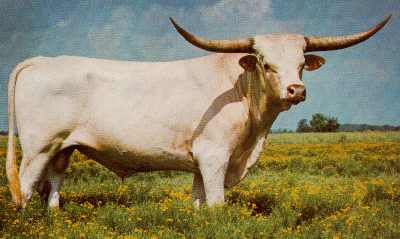 Classic -- was the 1973 product of the Milby Butler herd. His sire and dam were gifts to Pauline Russell for services rendered. (The entire story is in FILLET OF HORN II, the eBook which can be purchased on line from Amazon.) The Russells sold Classic at the Raywood Livestock Auction for a reported $317 and purchased by F. M. Graves. Graves used him on his registered cows but did not ever plan to register him due to legal and court proceedings which were extremely complicated. All the crazy details of how an unregistered bull, who was owned by a person desperately hated by the breeder are written in the FILLET book. I took this photo before Classic was registered and had not been ID branded yet. He was about 4 years old.

When I first saw Classic (he was not named then) I had read TLJ ads on bulls with 48" and 50" horn and one bull's ads said he was the largest bull in history at 52." When we first measured Classic he was just under 60" and his dam Beauty was also nearly 60." Both went past the 60 record mark later on.

Most of the time when a horse or bull excels beyond historic data there is a tendency for jealousy to boil up, and it did with Classic. A past association president predicted that Classic was in fact a steer, he had steer genetics and was sterile. It only took one semen collection by Carl Rugg at Elgin Breeders and a few seconds glance under the microscope to know, he was certainly not a steer.

White was not a poplar color at that time. In an effort to get the tide to bend a little and approve of Classic I encouraged Graves to place a color ad in the TLJ and announce "WHITE IS BEAUTIFUL." Graves was always conservative and a TLJ ad would cost more then he paid for Classic, so he would not. So I did -- I designed the ad and paid for it. When registering Classic, Graves also did not want to pay, so I paid the $15 to register him.

To minimize the white problem Graves bred him to spotted cows and as a result a high percentage were also white. Although both his parents were about 50/50 spotted, Classic was very strong white. At DCCI we bred him to black daughters of Don Quixote and solid red and dun cows. This was the best way to reduce the dominant white problem.

Milby Butler worked hard as an early serious horn producer. He bred for horn beyond all other factors. He talked often about horn, cork screw and wide horn. Classic was well beyond all other Butler bulls in tip to tip by over a foot, and that was a lot back then. Bulls like Mr. Graves, Man O War, Real Sam, New Sam, Conquistador, and most other foundation Butler bulls were from 34" to 45" max. Bold Ruler went over that mark but never crossed the 50" T2T magic measurement. Classic's dam Beauty was given a lot of credit for his special strong horn growth.

In the seventies many cows were in the 32" to 38" horn range. When bred to Classic the explosion of horn was the largest jump of all times. Classic provided a giant step in horn for the breed more than any of the other Butler genetics. More semen was sold for more money from Classic than any bull before or since due to the brilliant marketing of Red McCombs and the Classic Syndicate plan. He was the first $1,000,000 bull, a point most all breeds of livestock have never achieved, nor ever will.

Although Classic's 60" was revolutionary, today no one hardly remembers him, or his strong contribution. However, he is in nearly every real large horned bull's pedigree. The largest horned bull in history, Cowboy Tuff Chex traces back to Classic eight times. In fact, of the 16 largest horned bulls (Arrow Head) only Heavy Hitter does not trace back to Classic. Three important bulls who kept the Classic name alive in past years were Dixie Hunter, Senator, Red Mac Beau Butler, Unlimited and Coach.