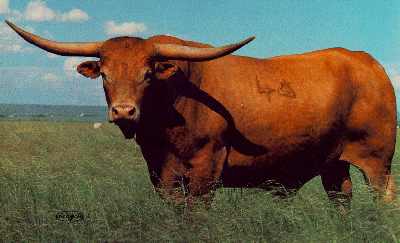 KING - is a son of Royal Mounty, out of a daughter of Texas Ranger named Miss Texas Ranger 262. He sports 64 ½" horn tip to tip & a solid red body color. He is well known as the sire of Zhivago. He often produces heavy thick bodies with a lot of bone & excellent dispositions. King sold at public auction at age 14 for $8,700 as a natural service sire. He is totally sound & a capable breeder even into his teenage years. The $8,700 price was the highest price paid for a natural service bull in 1995 of that age. King has a huge fan club. He has the miraculous ability to sire tremendous sons & tremendous daughters. He sires size, substance, horn, & body. Due to his red color he has often been used on white cows or cows with a lot of white. For best results, he should be used on cows with tight skin. He was one of the first Longhorns to reach mid 60" horn status and is still competitively popular long after his passing. Semen is economical. His daughters give abundant milk. He's very usable.