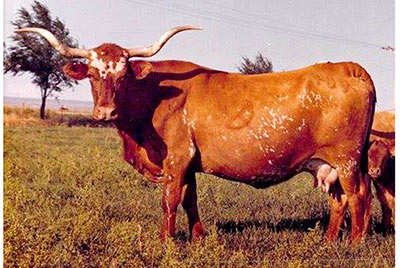 Wright 489 ~~ is in more TL pedigrees than all but 2 or 3 other cows. She was bred by Wright Materials of Robstown, Texas and purchased by George Cobb of Cadiz, Ohio as part of several dozen cows shipped to reclaim mine land owned by Conso>l Coal. She is much like hundreds of Wright cows that were breed leaders but over looked due to the lack of promotion of Wrights. They had a herd of around 400 purebred TL cattle during the seventies. George Cobb bought a bull named Senor Mulege by WR 2308 to breed the Wright cows.

Frank Doherty of Ft. Scott, KS heard about the Ohio cow herd and negotiated a deal to purchase the whole herd. He was especially excited about the heifer calf at side on Wright 489.

For many years a major sale was the Baker/Doherty sale the same week of the WR sale in Lawton, OK. To bring the crowd alive Frank decided to auction Wright 489. I wanted this cow bad and the heifer at side, also by Senor Mulage. In the final bidding I had to bid against Kassel Ost Ranch of Saline, MI. I bid $10,000 which was the highest price ever bid for a TL cow in 1978. Kassel Ost bid $10,200 and I let them have her. We had just sold Texas Star the previous June for $10,500 and I didn't want to break his sale record. No one knew at that time if ever any animals would bring higher prices.

After the sale I ask the Kassel Ost people what they would take for the blue roan heifer and they said $1000, so I gave them a check and later registered her as Bathsheba Fenklestein. I sold a heifer from her to Johnny Hoffman by Texas Ranger named Ranger's Bathsheba who he said was his biggest cow, and an early favorite in his herd. The earlier daughter of Wright 489 was registered by Frank as Doherty 698.

In time we did a partnership agreement and got to do embryo transfers at the DCCI lab in Colorado on both Wright 489 and Doherty 698.

Doherty 698 gave us Overwhelmer and Phenomenon. Of over 200 other calves by Senor Mulage, Wright and Doherty, nothing equaled the breed contribution of those two great bulls. Of course Overwhelmer sired Emperor and that was the crown of the Hoffman great cow families. Of the seven families, the WR herd was over rated and the Wright herd was under-rated. At DCCI we still sell semen on Overwhelmer if anyone wants to see history come alive again.