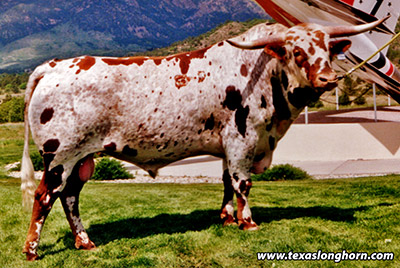 In June of 1991, Wanda Pridgen, the DCCI sales director, and I were driving to the World Show in Fort Worth from our Colorado home base. Wanda ask, "What is our plan for this show?" My goal was to buy the best bull at the show. (Most shows were judged by college professors who trained on prime grade fat steers with no regard to horn, color or historic TL breed qualities.) The plan is to identify the best bull, with good pedigree, pretty color and the most horn of any at the show -- then when the judge places him low in the class, I will buy him. Wanda asked, "If people ask what we are doing at the show, what should I tell them?" I said, "Tell them that."

Lethal Weapon was the senior bull entry of Tri-W Ranch. He was the widest horned at the show, pretty color, the tallest bull in the show and sired by Ladies Man, a full brother to Overwhelmer. He was difficult to show, moving all over the ring, never standing still, continually wrestling with his handler. The judge placed him 5th and said he was "slab-sided," "poorly shown," and was not "masculine enough." I was able to buy him within an hour of the show for $5000.

Bulls that mature tall and over a ton are normally frame first and muscle second. Bulls that never have a big frame often appear very masculine at an early age but never get real size with maturity. The bulls that won that day were very fat, thick to the ground, had matured early and were soon to stop growing. I am scared of mature looking young bulls -- they normally disappoint.

When we loaded Lethal Weapon he had a removable nose snap that he wore during shows. The handler said he was world war III to get the snap in or out and I could take him to Colorado with the snap in and mail it to the seller from Colorado. He warned me that he would hurt you when messing with his nose.

When we got him to the ranch we put him in a squeeze and removed the nose snap and halter. Inside his nose were silver dollar sized abscesses where the snap had pressed. He was rotten inside his nose and in mortal pain. He hated every tug on his nose snap. We removed everything from his head and left him alone. In a month, on good feed, we put a real nose ring in his heeled-up nose. It heeled and never had an abscess again. When I lead him by the halter and nose ring he was peaceful, stood posed, never fought his head and was easy to show.

We fed him good and did not put him with cows from June until the last of August. The ITLA Championship Show was in August. I showed him and he was a breeze. He was easy to stand, posed well and was All Age Grand Champion Bull in 1991. He was the tallest, thickest and most horn of any bull in the show.

To promote Lethal Weapon we wanted a photo with some symbol of a weapon. We found a pretty place with the Rocky Mountains in the back and a famous full size jet plane in a well mowed area north of Colorado Springs. Gary Lake and I unloaded Lethal, posed him and started taking photos. Within 10 minutes we were surrounded by Military Police and ordered to remove this bull from Federal Government property on the United States Air Force Academy. Under gun point -- we complied. Lethal Weapon was removed by lethal weapons. It was too late. This photo was taken. Lethal was used by DCCI for two years. He sired Lethal Zawe, Pueblo, Lethal Quest, Lethal Coe and Lethal Blade. He is in the pedigrees of Sebastian, Super Suspect, LLL Leweze's 7E5, Unsuspected, WS Sun Rise, etc. Semen is available from DCCI for $15. He is still very useable for rapid growth, large frames and size.