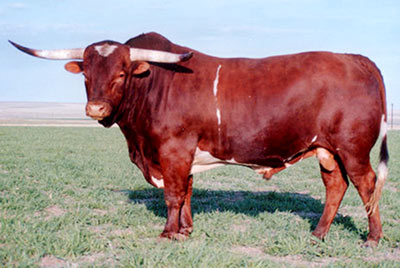 Senator ~~ In 1985 we staged an elaborate Texas Longhorn sale in the Grand Ballroom of the downtown Antlers Hotel in Colorado Springs. One of the DCCI consignments was Classic Reflection a yearling heifer by Classic, bred to Overwhelmer. She was purchased by Jim Hutchinson for a client in Maryland, Joe Oleinik for $2100. The following year Joe sent a photo of a basic little red bull calf. When this little bull was age 3 Joe called and said he had the greatest bull in the world with 65" horn and weighing over a ton. In that day that was amazing data. I ask him to weigh him again and remeasure him. It was done with a broom handle once, a neighbor's eye-ball once and other non scientific methods.

Any bull with that data in 1989 got my attention. Joe wanted $15,000 for him. I had a dear friend in Washington DC, Congressman Joel Hefley. I called Joel and ask if he wanted to help me decide on buying a bull. Joel was a horse man and knew the value of breeding stock. He offered to cut out of a session, meet me at the DC airport and then drive to Williamsport, MD. Joel was my last Congressman who would answer my phone calls and listen. Joel drove me to Oleinik's, we looked at the most beautiful TL bull I had ever seen and the it took over a month to ever do a deal with Joe. He was the kind of fellow who did not, under any consideration, want to leave a penny in my pocket after this deal was done. I spent the night on Joel's couch; we went to his church on Sunday morning and then back to Colorado. Joel served 24 years in Congress and has retired in Oklahoma.

This big red bull with a little white trim was registered as Whelming Reflection. I try to name important bulls names with 8 letters or less. I didn't think that was a good name. I thought Congressman would be appropriate, but Senator had a better ring to it, and was shorter. It is impossible to never make a mistake, but the joy of buying back a mistake is very rewarding.

Senator was above the breed in beef conformation, size and all around easy fleshing. His horn growth was a breed leader and few if any TL bulls were his size. For the first 2 years he was syndicated and shares were sold to 10 investors. The investors got a head start on selling his calves, then semen was available to the industry.

During the nineties more semen sold annually from Senator than any other longhorn bull. He was appreciated by people who wanted the total package. He tops the list of sires for the fastest gaining progeny in the breed even today. He has the privilege of being the sire of both great sons & great daughters. He sires much of the dark red chocolate pattern with beautiful amounts of splotchy white. Although his body color is mostly dark red, He is well known as a sire of beautiful rich color. Many of his daughters weigh 1200-1400 lbs. Senator daughters are loved for their thrifty condition during good or bad seasons. His most famous son is The Shadow who has 64.5" horns and weighs 2070 lbs. The Shadow sired Shadow Jubilee the third cow to measure over 90." He sired Gibraltar, the widest total horned steer ever measured officially in 2008. Most of the thickest cattle in the breed trace back to Senator or Zhivago. Senator is found in the pedigrees of Gunman, Grand Slam, Cowboy Tuff Chex, Rio Grande, Clear Win, Drag Iron, Rodeo Max, Tempter, Fifty-Fifty, Sweet Brindle Dust, Jamakizm, etc.

A half interest in Senator was sold to W. O. Marquess. W. O. was a great partner. Senator spent the Summer in Colorado and Winter in Texas. When DCCI made the move to Ohio the remaining half of Senator was sold to Michael Sturdevant. After W. O. passed away Ronny and Stella Cruse acquired Senator and have his polished skull to this day.

See him on 2002 You Tube. https://www.youtube.com/watch?v=DQTM7AMXIic