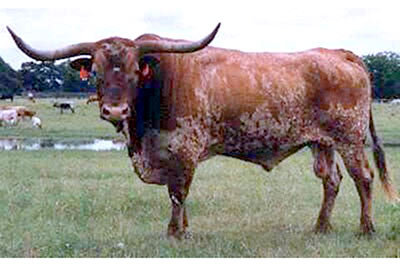 BAIL JUMPER -- only had two owners in over a dozen years of service, his original breeder Chad Dickinson and his final owner John T. L. Jones, Jr. He was always high dollar and only one person could ever afford to buy him. For 8 or 10 years semen was not allowed to be on the open market. He was an exclusive bull. He was bred natural by Dickinson Cattle Co for 2 years, used for AI privately, and then purchased by Jones.

Bail Jumper was by Cowcatcher and out of Ranger's Measles. He possibly never made past 60" T2T, but went well over a ton in size and made up for any failing by his consistent siring skills of very correct conformation. He was born in 1983 and at that time rapid gain, long body, thick hips and pretty heads were the goal. His about 60" spread was very good at that time, beyond critique. When Jones sent Bobby Duby to the shows with a half dozen or so Bail Jumper progeny they won Get of Sire consistently and nearly every class they were entered. Most were exactly the same markings as their sire with the dark chocolate red spotted colors. They could be picked out like cookie cut duplicates. When Rising Star by Bail Jumper showed up, he was all age TLBAA World Champion. Shena Bail, by Bail Jumper, shown by Lana Hightower, a new comer to Longhorn showing, was Grand Champion at Houston, Fort Worth and All Age ITLA Champion among other things. Houston, Jet Set, and TLBAA World All Age Champion Bull Jet Jockey were by Bail Jumper.

Bail Jumper, a half brother to Emperor, set the standard in correctness, in his day. Semen is still available from him and being used for those who recall his qualities.

As a result of the fame of Bail Jumper he appears in pedigrees today of popular cattle Cowboy Tuff Chex, Clear Win, Boomerang, Fifty-Fifty, Grand Slam, Drag Iron, Tempter, Jamakizm, and Cowboy Casanova. His contribution was large for a strong foundation of some of the breeds greatest, most valuable cattle.