This new born BueLingo is pictured with horn paste. If you don't like horns, it isn't a big deal! Make serious breeding decisions for small birth weights, large weaning weights and mellow dispositions, not a tiny horn button.

At Dickinson Cattle Company (DCC) of Barnesville, Ohio we specialize in big horned Texas Longhorn and African Watusi cattle. Although it is almost sinful to raise a cattle breed that have no horns, it is one of our tolerated sins. Our Dutch Buelingo are mostly poled, but about 10% have horns. The fact people expect Buelingo to be "defective" in the horn department, we dehorn a few each year.

Cattle production is about healthy cattle, minimal stress and bloodless production. To most herds castration and dehorning is a bloody, loud and stressful procedure, not for the weak of stomach. At DCC our policy is a total bloodless cattle production. If a castration or horn removal has loss of blood, we have failed in our livestock care procedures. When animals bleed, think of it as dollars falling out of your pocket. Not only that, livestock don't like to bleed either.

When a Buelingo calf is born over 90% are poled. Joel does the new-born procedure of ear-tagging with the mother's name, weighing, a selenium shot, castration with a rubber band if the calf is steer quality, and he checks the horn buds. If the calf has small horn buds he pushes the hair back away from the little horn and places Dr Naylor Dehorning Paste on the area about the size of a nickel. After placing the orange paste on the horn button area he rubs the hair back over the paste somewhat covering it. Something in the paste chemically ends the horn growth. A couple weeks later a thin scab appears, then goes away, and no horn ever grows. It is a blood-less horn removal. Most people think the cattle are naturally poled. 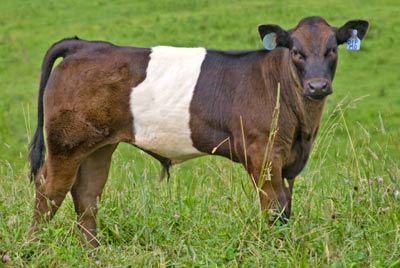 This 5 month old BueLingo had horn buds removed bloodlessly as a new born. If your taste prefers "horn defective" cattle -- totally nude of beautiful shapely spreads, it will cost you ONE PENNY.

In many cattle breeds people buy bulls that are poled because they want to avoid the blood and gore of dehorning, and actually pay a lot more for a poled bull. Here at DCC we buy a 4 oz jar of paste for $5.49 which will remove hundreds of horns for about a penny per horn. It takes a couple minutes. That is it. You can buy it at any good farm supply store.

Safe healthy animal care -- that's what it's all about. This isn't new -- my Dad used the same stuff on dairy calves in 1948.