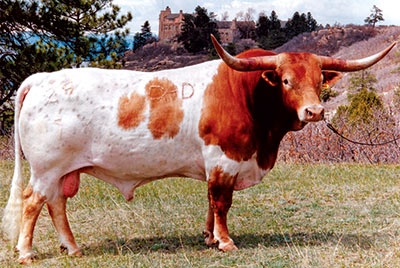 Zhivago ~~ In the eighties DCCI owned a tri-colored speckled cow, Safari B 119. She annually produced until age 20 leaving 19 calves. Over the years, with her different owners, Jack Montgomery owned her daughter Safari B 496, a daughter of Don Quintana by Don Quixote. In Jack's dispersal sale of 1985 I bought Safari B 496 with a 2 week old speckled heifer at side for $4500. After getting her home the heifer got poor, thin and never did good. Jack assured me this cow was a good milker. I did not think so. She was a nothing heifer. I was serious about grinding this disappointing cow, but $4500 was a long way from hamburger value so we took a chance. In 1986 she was bred to "King" who was the first over 60" over a ton TL bull. When the "King" calf was born he was huge, grew fast, had a large frame, heavy bone and was dog gentle.

About weaning time two ladies, one a legal secretary, the other dabbled in real estate, bought Safari B 496 and her huge bull calf. They boarded their purchases with DCCI, which was not fun. They registered the bull calf as the goofy name of King Thunder. They wanted him shown at all the shows so I entered him in the Denver show and he won his class. He was huge and always the largest entry for weight and horn spread. With a lot of large cattle comes some loose skin. To help him win we got him as fat as possible to "fill up the skin." He was so extreme the judges did not know what to do with him. His owners decided we over fed him and sent him to another person for showing -- they put him on a diet and then his skin really got loose.

King Thunder was shown at the TLBAA World Show in 1989. At that time every entry was weighed, horns and scrotal circumference measured. He had the most horn, most weight and 2nd scrotal. He was the most horn of any World Show bull entry his age. After the show he was boarded at the old Yellow Pine Ranch. With some disagreements (not paying the board) King Thunder was sold by Yellow Pine for board money. Mike Zavisland of Pueblo bought him and called DCCI. Mike sold him to DCCI for $2000.

Now he was 3 years old. DCCI was selling semen to International Farms in Warsaw, Poland after Poland was freed from communism. King Thunder's name was changed to reflect the Russian freedom fighter Dr. Zhivago. This made him a very popular semen sire. Over 5000 straws was sold to Poland.

Zhivago was well over a ton and horns in the sixties. He was bred to a sizable herd of cows at DCCI and the result was huge calves, thick bone, great milking ability and ample horn.

DCCI ranch foreman Gary Lake really took to Zhivago. He wanted to train him to ride. It took him 3 days until Zhivago was being ridden around the ranch drive way in a gentle controllable manner. During his riding career under Gary Lake he was used in TV commercials, Rodeo Team Penning, Celebrity Rodeos, semen collections, TV Live News Broadcasts, political rallies and yard parties. He was a very smart, gentle and kind bull.

His sire was "King," so the historic Cherokee Castle owned by Tweet Kimball seemed to be the fitting background for the first promotion photos. His dad was king and kings have castles. A deal was struck with the castle owner and a series of photos were taken at different places around the castle.

In July, 1993 Bill and Sue Burton, at that time of New Berlin, NY, bought Zhivago. He had served for breeding and promotion for DCCI for 5 years plus AI. Zhivago continued to breed natural for Burtons & Stockton at Cleveland, TX until through his 22nd year. He had huge bone substance and remained sound for breeding until his passing. The Burton/Stockton herd has a generous herd of his daughters often with beautiful cork screw horns and above breed averages on beef size. Zhivago had a top weight of just over 2200 lbs.

Very few TL bulls who weigh over a ton do not trace back to Zhivago. In fact there may not be any ton-plus bulls who do not trace to either Zhivago or Senator.

During his final years clones were produced from Zhivago creating a whole new future life for the exact DNA to continue the Zhivago legend.